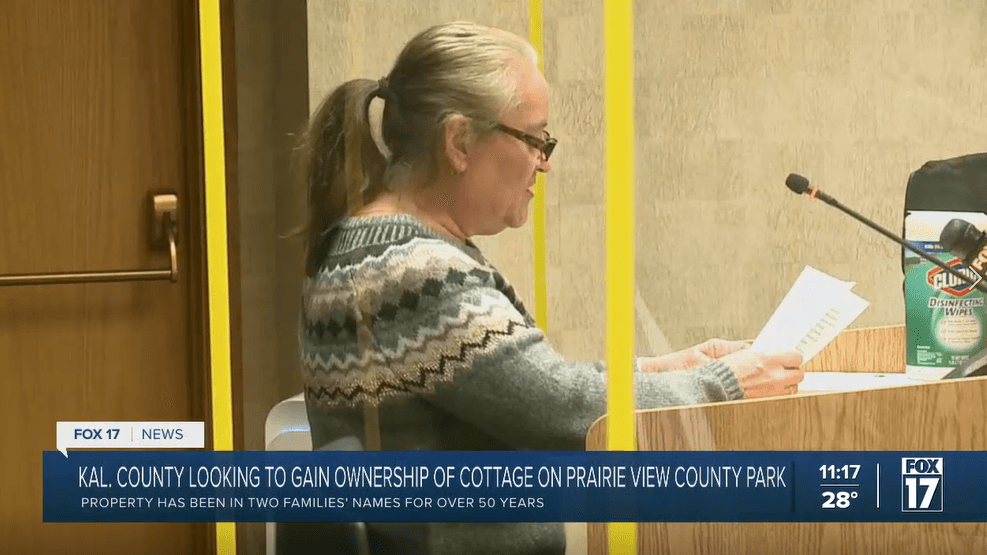 For the past five years, the Talanda/Johnson cottage inside Kalamazoo County’s Prairie View Park has been the subject of much angst for the heirs who now own the cottage. The county claims that they have rights to ownership of the land the cottage sits on – based on a 1963 agreement. The families have contended and have won two court cases noting that the county must purchase the property at fair market value, if they want the land.

The Kalamazoo County Board of Commissioners was once again the scene of the next step for the Talanda and Johnson families to fight to keep their cottage, which has been in the family since 1949 – 14 years before Prairie View Park opened. But this time was different as a contingency of individuals who live around Gourdneck Lake, which the cottage sits, and other members of the public came to the defense of the cottage’s current owners.

“Think about what you’re doing,” Gourdneck Lake resident Chris Hunt said, MLive reported. “You’re taking away a family’s legacy.” She said the families who visit the cabin have always been peaceful and quiet.

Hunt was one of more than a dozen members of the Gourdneck Lake Association and surrounding residents who spoke out against the county’s plans to acquire the family cottage during its board of commissioners meeting on Tuesday, March 1. They believe the cottage inside the park needs to stay with the families, and asked for more information about what the county wants to do with the land.

Gourdneck Lake resident Jim Stephanak, who called in to the meeting, said he wants the commissioners to vote against acquiring the land, according to MLive. He asked if the money proposed to be spent is the best use of taxpayer dollars, saying the park is in “total disarray.” Stephanak said there are a lot of other things the county could spend the money on.

“Is that really going to add value?” he asked about the addition of the property, and asked what it is going to be used for.

"My one ask is that for the residents of Gourdneck Lake to hear what we want and how the money is being spent," Gourdneck Lake Association member Gary Kaylor said during Tuesday’s meeting, FOX 17 reported.

The “pinkie-nail” sliver of property that the county is trying to take has been in the Talanda/Johnson family since 1949 – 14 years before Prairie View Park opened. With 142 feet of shoreline on Gourdneck Lake, the property is located in an area of the park rarely used by visitors and seldomly maintained by the county.

The family sued the county twice, once in 2017 and again in 2019, and won both cases in Kalamazoo County Circuit Court. The latter ruling affirmed the county repeatedly violated the Open Meetings Act in its move to condemn the land after learning the last living member of the original signors, Edmund Talanda Sr., had died and claiming “first right to purchase,” per its interpretation of the agreement between the original family owners and the county when the park opened in 1963. That move would allow the county to assert control over the property, and allow the cottage and its land to be used by the general public.

However, the property has never been sold outside the family. The two family groups that currently own the property are all bloodline heirs of the original owners.

"My grandma and grandpa, may they rest in peace, never would have wanted this to happen," cottage owner Chad Hetter said during the meeting, FOX 17 reported.

"Is this greed or need. Our family believes this condemnation case is rooted in greed," cottage owner Joyce McClish said during the meeting.

After hearing complaints from citizens at the board meeting for more than an hour and a half, commissioners voted to table any action to acquire the property. The public may speak out against the county taking the Talanda/Johnson family property and spending an exorbitant amount of taxpayer money on the case’s legal fees during the board’s meeting at 7 p.m. April 5, on the second floor of the County Administration Building, 201 West Kalamazoo Ave., Kalamazoo.