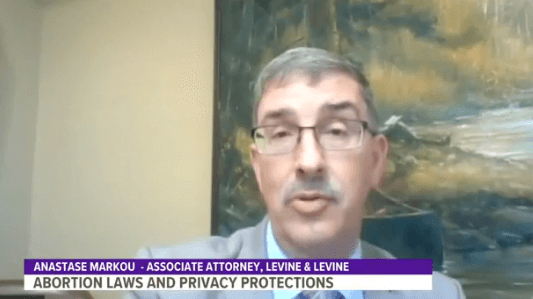 When the U.S. Supreme Court overturned the landmark 1973 Roe v. Wade decision that legalized abortions nationwide, it triggered many state laws on abortion, including Michigan. Criminal Defense Attorney Anastase Markou spoke with media outlets about Michigan’s 1931 ban on performing abortions, which is currently on hold while being challenged in court.

While Michigan Attorney General Dana Nessel has said she wouldn’t prosecute abortion cases and wouldn’t go after any doctors’ licenses for performing abortions, Markou told WOOD TV8 the Court of Claims’ decision “includes the attorney general and any agency or attorneys that the attorney general supervises.”

“The attorney general is a constitutionally-mandated position in the state of Michigan,” Markou said in an interview with WOOD TV8. “One of their roles is to supervise prosecuting attorneys throughout the state of Michigan. So in one way, the Court of Claims’ restraining order can be applied to county prosecutors. If a judge rules that a law is not enforceable, that’s what it means.”

Markou added that there could be a case, albeit not a strong one, when it comes to the argument that county prosecutors are not explicitly named as parties in the injunction alongside the attorney general, he told WOOD TV8. With more guidance to come from the courts out of these cases, Markou said it’s a good idea for prosecutors to err on the side of caution.

Additionally, Kent County Prosecutor Chris Becker issued a statement that he will enforce laws that are on the books.

“Prosecutors' offices routinely and regularly choose not to enforce old and outdated laws,” Markou said in an interview with WGVU news.

WZZM 13’s Verify Team posed the question about how abortion-related prosecutions would work in practice, given that medical records are protected under state and federal law: Why would HIPAA (Health Insurance Portability and Accountability Act, a federal law) not keep anyone from knowing whether or not someone is having an abortion? Doesn't HIPAA protect a woman's right to privacy?

“The reality is every patient… has the right to privacy,” Markou explained in his interview with WZZM 13.

If a patient’s doctor, however, were charged with a crime, including under the 1931 law, Markou acknowledged that, in most cases, patients could rely upon a certain level of protection, WZZM 13 reported. Though, there is a chance relevant records could be admitted as evidence in court.

“That particular question is not one that’s easily addressed,” Markou told WZZM 13. “Courts have to apply a test or a standard in Michigan about weighing the right to privacy, the right to confidentiality against the need for records.”