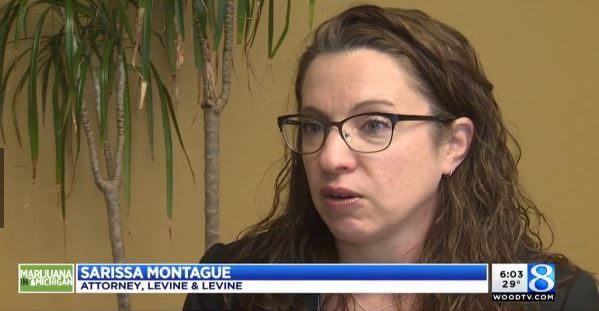 “This is a huge transition time,” Montague said on WKZO’s The Morning Show with Ken Lanphear. “There’s going to be a number of issues that we, as a legal community, are going to have to deal with over the next few months and likely, years. Our law firm has been very active in the Michigan Marijuana Act for the last 10 years and it has taken 10 years to figure out what we can and can’t do and there’s still a lot of grey area in the law. Legally, it’s interesting because there’s going to be a lot of litigation on this issue.

“This law is going to go through changes and there’s going to be a learning curve,” she told FOX 17. “As a law firm, Levine & Levine are going to stay on top of the legislation day by day by day to see what changes are going to apply.”

During her interview with the Battle Creek Enquirer, Montague explained that marijuana consumption in public remains illegal, but it is now okay for Michigan residents to consume marijuana in the privacy of their own homes.

MLive’s Kalamazoo Gazette also spoke with Montague about a Kalamazoo brewery wanting to offer a private cannabis club for its customers.

“The marijuana act is intended to allow people over the age of 21 to use marijuana unless it is specifically precluded by the act,” Montague told The Kalamazoo Gazette. “That said, there are still grey areas and it might take court cases to figure out what those grey areas mean.”

How can I obtain marijuana?

Currently, people can only obtain marijuana if no more than 2.5 oz given to them; it cannot yet be purchased or sold in Michigan, according to Levine and Montague. Marijuana shops cannot sell it just yet. That will come in about a year as the state comes up with specific regulations for purchasing and selling marijuana.

How much marijuana can I be in possession of legally?

Michigan residents can use it, transport it, possess it and grow up to 12 marijuana plants at their home. People can have up to 10 oz of marijuana, but any amount over 2.5 oz must be locked away.

What if I rent an apartment? Can I smoke marijuana in the apartment I rent?

Montague explained that landlords have the right to prevent tenants from growing and smoking marijuana in their rented spaces. But they won’t be able to stop tenants from eating it.

The law says that, while a property owner can prohibit or regulate “the consumption, cultivation, distribution, processing, sale, or display of marijuana and marijuana accessories,” a lease agreement can’t prohibit a tenant from keeping up to 10 ounces at home or “consuming marijuana by means other than smoking.”

What should people know about marijuana in the workplace?

“Just because it is legal doesn’t necessarily mean that your employer needs to allow it,” Montague told WOOD-TV 8. “They are allowed to hire, fire, not hire, not fire — do whatever they want. People who use marijuana are not a protected class and I think that’s what people need to understand is that employers still are going to have the right to make decisions even though marijuana is legal.”

Montague and Levine suggest checking your employer’s policy on drug use.

“This is uncharted waters,” Levine told WWMT-News Channel 3. “We’re entering a new landscape and nobody really knows how it’s going to play out.”

What about traffic stops and subsequent searches?

Drivers cannot operate vehicles, aircraft, snowmobiles, off-road recreational vehicles, or motorboats while “under the influence” of marijuana, but what “under the influence” is exactly is still an unknown, Montague explained. The new law also prohibits smoking marijuana inside a car, meaning officers conducting a traffic stop could have probable cause to search a vehicle if the smell is noticeable. Smoking marijuana within the passenger area of a vehicle on a public way is also prohibited.

“Marijuana users need to be aware that there’s not a blanket entitlement to using marijuana wherever you want however you want,” Montague said. “There are laws. The penalties are different, but there’s still regulation of it.”