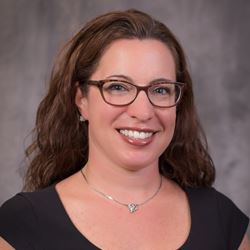 Defense attorney Sarissa Montague of Kalamazoo-based Levine & Levine was able to convince a jury that her client, a former Mattawan police officer, was justified in firing at a reported stolen car while trying to stop the fleeing vehicle in 2017.

The former Mattawan police officer, Chelsey Omilian, was charged with reckless use of a firearm, a misdemeanor, after firing five shots as the reported stolen vehicle, a Chevy Impala, fled from her. The trial against Omilian began Thursday, Jan. 24, in Van Buren County District Court with the prosecutor claiming Omilian was reckless when she opened fire, while the defense argued she was justified in using force to attempt to stop a fleeing felon whom she had reason to believe was armed and dangerous.

After testimony concluded on Friday, Jan. 25, the jury reached their verdict and agreed Omilian had the right to discharge her weapon.

“Officers have a sworn duty to protect the communities they serve, and she was doing just that when attempting to stop a vehicle with a known felon believed to have been armed,” said Montague.  “The verdict of not guilty vindicates Ms. Omilian who has lived under a cloud since being wrongfully charged with a crime. She had a split second to make a hard decision and the jury verdict tells us that she made the right decision under difficult circumstances.”

Before the trial against Omilian began, Montague convinced Van Buren District Judge Michael McKay that two key items must be presented at trial during an evidentiary hearing last August. Montague argued that she should be allowed to share evidence with the jury about what Omilian knew about the suspect who was being accused of stealing the car.  This information including the suspect’s name, his past felonious criminal background, and that he most likely had a gun in his presence. Second, Montague also won the right to have the judge instruct the jury that police officers do have the right to discharge their firearms when a known felon is fleeing.

“No officer is happy when they have to use their service revolver to stop a crime from happening,” Montague said after the August evidentiary hearing. “Officer Omilian had to make a quick decision involving the safety of not only herself but the community when she decided to try and stop the driver of the stolen car from continuing on a crime spree and potentially hurting others.”