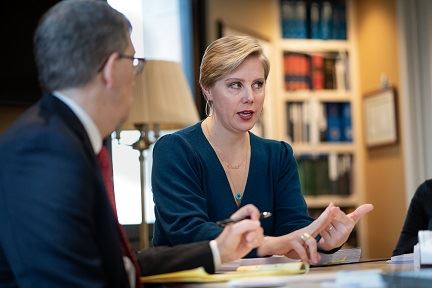 In a 4-3 decision, the Michigan Supreme Court ruled that Michigan judges may no longer automatically sentence 18-year-old first-degree murderers and conspirators to life in prison. In an interview with MLive, Criminal Defense Attorney Kirsten Holz, who previously worked in the Kent County public defender’s office, called the ruling a “wonderful recognition of what we continue to learn about the brain chemistry of juveniles and young people.”

Because 18-year-olds don’t have fully developed brains, they shouldn’t be held to the same mandatory sentencing standards as older defendants, the court said in its July 28 decision.

“This is going to create a lot of extra work for the court system,” Holz said in an interview with MLive. “This will be a many-years-long process for these men and women to have their day in court.”

In order for anyone age 18 or younger to be sentenced to mandatory life in prison, they must receive a special sentencing hearing, according to MLive. If they aren’t provided a sentencing hearing, the maximum minimum mandatory sentence they may receive is between 25 and 40 years. This does not apply to elder defendants convicted of first-degree murder, or conspiracy to commit first-degree murder, which by state law carries a mandatory life sentence.

“If I was a betting woman, I would say we will see that as science continues to progress and we’re able to better study the brains of young people accused and convicted of crimes, I think we will see this type of broadening of statutes of protections for younger people,” Holz told MLive. “They just don’t have the same impulse control.”

In an interview with WLNS in Lansing, Holz explained that if the court determines that this can be applied retro-actively, this could lead to new hearings for people who are serving life sentences for second degree murder.

“It demonstrates a recognition by the highest court in the state of Michigan that juveniles are different, their brains are different and as years have passed, we have begun to learn more and more about juvenile brain chemistry and that’s being reflected by these decisions,” Holz told WLNS.

The state Supreme Court ruling broadens prior U.S. Supreme Court decisions that determined automatic life sentences for minors, defendants who are 17 or younger, are unconstitutional.

The U.S. Supreme Court in 2012 ruled in the court case Miller v. Alabama that it is cruel and unusual punishment to sentence juveniles to life in prison without the possibility of parole, arguing it violates the Eighth Amendment of the U.S. Constitution, MLive reported. A second decision made in 2016 by the same court determined that that rule should be applied retroactively.