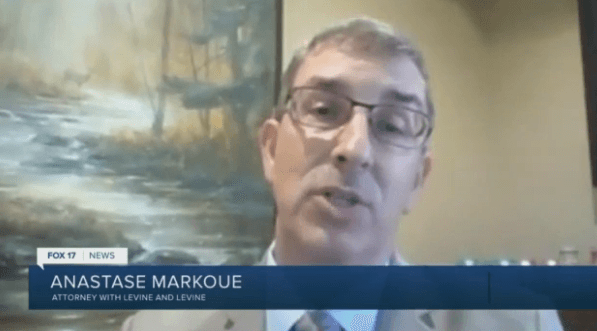 FOX 17  and WWMT spoke with Anastase Markou, criminal defense attorney at Levine & Levine, about an Allegan County Health Department COVID warning letter that had been issued to a parent and gone viral on social media.

The letter was sent on Aug. 27 to a parent or guardian in Allegan County notifying them that their “son or daughter has come in close contact with a COVID-positive individual and has determined that he or she is a “carrier” and is a ”source of infection.” It also states that the person is required to cooperate with the department to prevent transmission and if they don’t comply, they’ll consequently be “taken into protective custody.”

Lindsay Maunz with the health department says only the first page of the letter has gone viral, and the letter has been sent out many times since the beginning of the pandemic, according to FOX 17.

However, Markou, who reviewed the letter, foresees some challenges ahead.

“I think there are multiple challenges to that statute,” Markou said during his Zoom interview with FOX 17. “The first challenge of the statute is who’s a carrier? So, if somebody is actually a carrier of a disease that is communicable, that caused other people to be in serious risk of their health including death, then I could see there possibly being a government role in telling them, 'Hey, you know this is your notice.'”

Markou explained that the term, “carrier,” is too broad, and could see parents and lawyers challenging the definition of it. Another challenge Markou foresees is what happens if a person chooses not to comply, questioned if the consequences are “reasonable” and said people's freedoms should be considered.

Markou explained to WWMT that parents have rights and that it's up to the courts to decide through the legal system if a child goes into protective services.

“I don’t believe you can take someone’s child away just because the child has been exposed to COVID-19 and the parent has not followed the specific request of Allegan County,” Markou said during his interview with WWMT.

Markou told WWMT that parents could face other penalties; however there would have to be a drastic situation for parents to have their children taken away.

“I think the letter is a little broad. I think they went too far in the way they worded the letter,” Markou told WWMT.

Read the entire stories below: