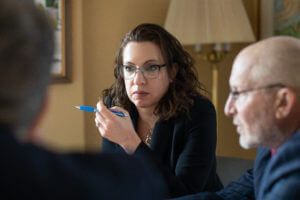 I received a call the other day from the mother of a 17-year-old daughter who had been charged with trespassing, a misdemeanor crime. She and some friends were hanging out late at night on the property of a local business. They weren’t doing anything wrong, other than being there in the first place. But the police saw them there and issued them each a ticket for trespassing, and now have to appear in court.

The mother was irritated – saying the kids weren’t doing anything wrong and wondered why the officer couldn’t have just given them a warning and tell them to leave the property. Years ago, that is exactly what likely would have happened, but not these days.

In today’s world, so many of our youthful indiscretions are treated as crimes. Circumstances that were never dealt with in the criminal justice system are now, in fact, addressed in District Court or Juvenile Court. This includes malicious destruction of property (previously known as graffiti); retail fraud (modern day shoplifting); assault and battery (a fight); and a variety of traffic violations, such as leaving the scene of an accident without reporting it to law enforcement or driving in violation of a restricted license.

Initially, the mother of the 17-year-old didn’t think the trespassing situation was a big deal, because in her day it wasn’t, and figured that they could handle it on their own. However, the reality is, that even though the conduct that led to the charge was not egregious, the consequence of having a criminal conviction on one’s record can be very problematic and a hindrance to their future endeavors.

When the mother mentioned to me that she is a professional hairstylist, I suggested she consider the difference between the results when she cuts or colors someone’s hair versus someone – who is not a trained stylist – attempts to cut or color their own hair. The non-professional stylist might be able to get the job done, but in most cases, the professional stylist will do a better job. It is no different in the legal world, and with significant life consequences of a criminal charge, going at it alone is often not the best choice.

If you are charged with a crime, it is important that you obtain experienced counsel to defend you. At Levine & Levine, our team of attorneys has over 40 years of experience in defending criminal cases. Contact us today: (269) 218-8880