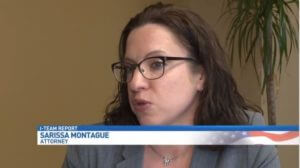 In March, Principal Tim Eastman sent a letter to parents announcing the increased enforcement that aims to crack down on e-cigarette use, also known as vaping, in schools. The letter states, “When we encounter groups of students congregating and loitering in the bathroom or multiple students in a closed bathroom stall, we will bring those students to the office to be searched.”

Eastman said the school’s administrative team conducts the searches. All of the high school’s deans are male. While parents agree there is a vaping problem in the school, they expressed concern regarding how the searches are being done.

Montague explained that students have constitutional rights in public schools.

“There is still a Fourth Amendment right against unreasonable searches and seizure,” she said during her interview with WWMT. “However, the standard in a school is less than what it would be for a person just walking down the street.”

The Fourth Amendment allows a person to refuse to be searched unless an officer of the law finds probable cause. The U.S. Supreme Court, in a 1985 ruling, lowered that standard for students in public schools to what’s known as reasonable suspicion. If there is reasonable suspicion a student is breaking any laws or school rules, public school officials can search children. The court established a two-pronged test of reasonableness for student searches. First, the search must be justified at its inception.

“At the time that they begin the search is there a good reason why they are doing it,” Montague said in the interview. “I think that there always has to be a concern for a situation where somebody’s constitutional rights are potentially being violated.

“From the school’s perspective, there is a safety concern and also an educational environment concern,” she added.

Michigan law addresses the search of school lockers, but not students. Policies are written by school boards and vary by district, the Michigan Department of Education reports.

According to the Mattawan school district’s policy, searches are to be done and overseen by a person of the student’s gender. Eastman said that has been a challenge because all of the high school’s deans are men and added a woman school resource officer has assisted in some of the searches.

From a legal standpoint, Montague told WWMT, that could be problematic. The lower reasonable suspicion standard for student searches in a public school applies to school administrators. If school officials call the police in to do a search, Montague said, the probable cause requirement still applies.

School resource officers fall into a bit of gray area.

Read the interview with Montague, here.