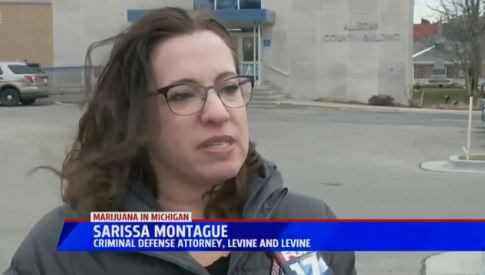 Criminal defense attorney Sarissa Montague praised law enforcement and state officials for taking a cautious look into the issue of impaired driving and marijuana use, before creating a policy on it.

“It’s a really tough thing to tackle,” Montague told Fox 17 during an interview outside the Allegan County Courthouse on Thursday, Jan. 9. “It is very smart to be taking a slow approach to figure out a way to actually stop the behavior that we want to stop.”

Montague, who works at Levine and Levine's law office based in Kalamazoo, said that marijuana and alcohol have to be treated independently.

“What is different between alcohol and marijuana is that with alcohol it has been scientifically determined that if you are .08 milligrams Blood Alcohol Content then you’re able to operate the motor vehicle is influenced,” she said in the news interview. “That limit has not, and I don’t believe will be, set in Michigan for purposes of marijuana.”

Montague said she believes more time is needed to explore the issue. There’s a number of aspects that need to be considered like how much marijuana consumption is too much, the reasons why it’s taken, and its’ effects on different body types.

“Our state is doing a good job looking at the issue carefully slowly, trying to come up with field sobriety tests that might apply to the use of marijuana as opposed to the use of alcohol,” Montague said.