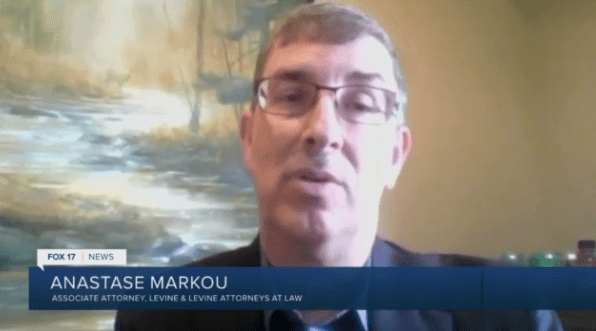 Federal prosecutors filed a motion in court on Aug. 18 asking the judge to grant Ty Garbin a "4-level downward departure" from the typical sentencing guidelines in the case of the alleged plot to kidnap and kill Michigan Gov. Gretchen Whitmer, reducing the amount of time he’ll serve behind bars. Garbin, along with four other men, has been federally charged for the alleged plot. In their motion, prosecutors said Garbin had "willingly put a target on his back to begin his own redemption."

Anastase Markou offered his legal expertise in an interview with FOX 17 after Garbin decided to cooperate with the prosecution.

“I would expect that there’s a lot of evidence,” Markou, who’s not involved in the case, said during his interview with FOX 17. “How strong that evidence is to show they’re actually going to go forward with the plan – that’s something else. Unfortunately, in federal prosecutions involving conspiracies of any kind, drug cases and conspiracies like this, one thing that does happen is that certain people are essentially offered cooperation deals and that can sometimes strongly support the government’s case.”

“Now the government has somebody who’s on the inside and not working for the government prior to the charges, saying that in fact what the government claims to be true is true,” Markou told FOX 17 on Aug. 18. “The other side of that coin is that the person is saying it in exchange for extraordinary consideration and possible sentencing down the road.

“It’s a very tough mountain to climb,” he added. “Essentially you have to show that the government was acting in an outrageous way by having somebody commit a crime that they otherwise might not have committed. So, if the defendant for the person charged in any way predisposed to commit the crime, or there’s evidence of that, it makes it more difficult to prove an entrapment defense.

“I think it’s important for people to not judge whether or not someone is guilty and let the court system do that. You don’t know what the facts of the case are – there’s so many more pieces of the discovery that the public just doesn’t know. Let the system play out.”

The day prior to Garbin's upcoming Aug. 25 federal court sentencing in Grand Rapids, FOX 17 featured Markou again in regard to the case.

“In just about every conspiracy case, you will have at least one cooperating defendant,” Markou said during the Aug. 24 interview with FOX 17. “One thing that does happen is that certain people are essentially offered cooperation deals, and that can sometimes strongly support the government's case.

“Other times those cooperation deals just point out that this whole entire case is built on the government creating, essentially, a false narrative or a false crime,” he added.

Watch both of Markou's interviews with FOX17 below: